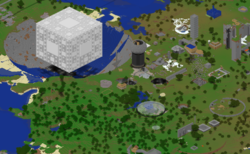 The admin-only warp Test1, where admins can practice with potentially destructive tools (and usually get little accidents out of their system). Players are warned to keep a distance from it, as sudden and violent landscaping is liable to occur in the area. This map screenshot demonstrates a selection of little accident remnants.

A minor incident with the degriefstick.

A crowd gathers around a mysterious bedrock block replacing a sign on the Visitor Centre, a protected area.

A general term of reference for accidents that tend to be far from "little" in reality, usually caused by typos or other dramatic fuckups when using admin tools. Associated with

Such incidents usually involve the annihilation or irreversible alteration of large portions of landscape and man-made buildings, the spontaneous creation of horrible ugly unnatural monstrosities, and other misuse of dangerous admin and moderator commands resulting in general crashing of clients and servers alike.

Night of A Million Torches

Main article: The Nothing

A corner of a deleted area

Part of the affected area 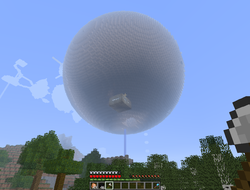 The Dirt Star as seen from bellow 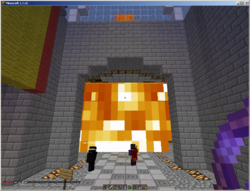 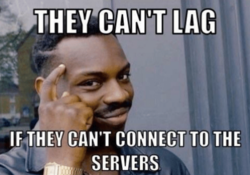 The Hopper from Hell

Krenath> I want to name it "Dennis"
<

Parts of the End replace spawn