CliffCity is a Large City used for Wayward Travel & Trade, And was Founded on accident by

TheGolum On Feb 1st 2019, The City is connected by Rail and Road. it dangles off a large Mountain With almost No Support, and was left to rot by

TheGolum after a greif raid. On January 2nd of 2020

Flamehaze97 in hope of better conditions. The town has been handed over to the server during December 2020 after several attempts to revive the town.

CliffCity is in the Southeastern Region, A Region full of Deserts and Dry Biomes. its filled with investing Cliffs, and some small Towns CliffCity is the Main City in the Region Along with Crown's Landing and Gran Syre. an is the Center of wayward Travel and Trade for the Lone Region. the City Is protected from all mobs due to it being on a Shear CliffFace. CliffCity isn't just plot town, its a City with lots of empty spaces, just get a empty spot and start building!, just contact

TheGolum by /mail or /msg for more info, your house will be greatly protected from mobs alike, due to the steep Clifface.

TheGolum Stocked up On Cobblestone, Stone Slabs and Torches For Making A Small Sky Highway He Used Then Quickly Stormed Out of the room with Small Food Amounts and built a Sky Highway Similar To the Ancients.

TheGolum's best Goal was to Dress or Disguise himself as a Highway Builder To Avoid The Kingdom of Highlands.

TheGolum was sacred of Highlands Owned by

88NK a Territory Moving more North To his Home. So He abandoned his Humble home and turned into a highway Builder. After Poor

TheGolum Ran out of food, he started to Panic but despite the difficulties he moved on to get As Far Away as he could from the Highlands. Days Past... and he was Starving to death at 3 hearts left he Looked up and he saw the most beautiful Thing He had ever seen in Minecraft. 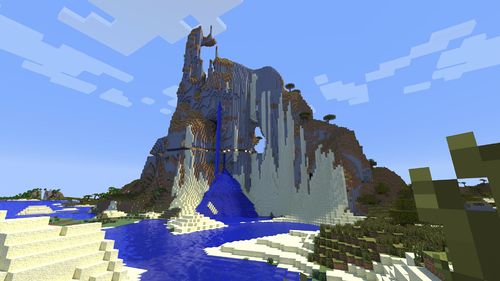 So Beautiful, it hurts my eyes -

TheGolum slowly walked over to the mountain. and set up a small camp this first home in the area was inbeded in the Cliff. A chest and two Torches Over Time He expanded a path though the Mountain A small mine he then made tower and Invited his Friend

MathRoQ to Help. over Time they both created a small Dock. They started building more and more and they started to invite Players over to the town! at the time it turned into a small town from a camp. on March 7th of 2019, 3 major plot Towns Poped up all around Freedonia! these 3 towns were all very hungry for people to join them. These Towns were named Crown's Landing, vhsTown, and Socorro vhsTown and Socorro when in some place different. BUT! the thing was that out of nowhere when

TheGolum was on /Map he saw Crown's Landing!! and it only was less than 1000 blocks away! the better thing was that at the time Highlands & CliffCity along with Crown's Landing had all joined the peace treaty! witch made

TheGolum Feel better. the only thing is that crown's Landing was a Growing City witch meant it easily took over the "Most Economic City in the area" title. trade was lessing for CliffCity and more trade kept on going to Crown's Landing. CliffCity got more and more trade and effort put into project in the town, the town was built up 10 times bigger than it already was, the walls were needed to keep the mobs out. But one day the Owner of Crown's Landing said that he is making rails for his city, in Order to get a Nexus.

TheGolum Offered him a way to do it easier, Why Don't we connect our towns with rails? when he said that, the project was on, Expanding the Great SoutheasternLine was a big Project with lot of gold needed.

After CliffCity was attacked by ruthless greifers, it led CliffCity into dust, with other plans

TheGolum had no mood to rebuild, after a pathetic tampering with the Town he ends up ruining it up more, with little hope Golum abandons CliffCity for others to find... After 7 months of little to no attention Golum starts to rewind the town to better conditions by transferring ownership to Highway Builder

Flamehaze97, A complete revival as well as a nearby town of Eagle Outpost is in the works.

CliffCity joins Bedrocco Empire as part of the State of Cascadia Wood and the County of FillyWilly on 4-17-2020, annexed by

Flamehaze97. Later to join the United States of Freedonia.

Despite attempts to revive and fix up the broken down town of CliffCity, it’s no use. Although getting connected to an actual rail, CliffCity still lays on the cliff it was built on, not expanding. Unfortunately on July, 4, 2020 Flamehaze quits MCO, claiming to have handed the village over to the server. Making CliffCity one of few towns on Freedonia to be owned by the administration.

Flamehaze97 came back to MCO in September 2020 and attempted once more to revive the town. She tried to turn the town into a free build area and connect it to nexus adding Eagle Outpost as it's suburb. Flame finally abandoned the town after partially maintaining the town and finishing building the extension of Golums Highway to Camden Parkway. The town will be handed to the server for good in December 2020 and will still remain apart of the United States of Freedonia.

The Tower, is a big tower used for getting from place to place in CliffCity, mostly districts, It uses The Lift Up signs to get from place to place. the Tower houses the willpower to get to these places. Middle District, Bottom District, Half District, Cloud District, And Housing District, Districts are places that are layers, or Floors of the City. 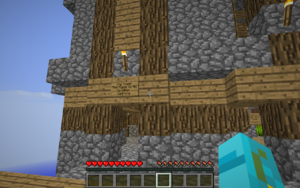 CliffCity Catch you by surprise? Do you want to visit? Well then there are some small ways to get in the town! First of All there is a Rail System! The Rail System was made by

On April of 2019 CliffCity was abandoned by

TheGolum and left to rot, after some greif runs and raids by greifers. and was left by Golum for others to find.

We have joined the "Peace Contract" of Peaceful Society,