The USF is an empire in Freedonia that governs over cities in Freedonia. It is born out of the ashes of BenEm, Freedonian Imperial Federation, and Bedrocco Empire. The empire has 484 unique members from across Freedonia and growing.

The Empire does not claim any real power over the members, we just seek to unite everyone and give them a seat in the senate and protection. The senate meetings are headed by the senate head,

snakyman. The bill can be vetoed or altered by them.

This empire was founded in December 2019 by a group of settlement leaders who wanted to form a strong and wholesome empire, so they made the Freedonian Imperial Federation. However,

snakyman was banned, so it restarted when

Beeraeka, President of The Republic of Verico and King of Las Vereno, and

verydairyman, Governor-General of New Verico and Government Leader of Las Vereno, create an empire called "The Bedrock Empire." Not long after,

KingServal wanted to join, so he merged with

Beeraeka to create the Bedrocco Empire on March 14, 2020, . The ceremonies of the founding of both empires were held in Las Vereno and was attended by many people, including the Emperor of Jibtopia,

snakyman was unbanned and they both merged. The United Bedrocco States was a nation part of the former Bedrocco Empire that consisted of three states; Takadokia, Sand Island and State of Cascadia Wood. It came to be on June 1st, 2020 after

HY_Turkic agreed to unite their nations. On June 2nd, Cascadia Wood joined. HY then soon left the UBS. Bedrocco Empire and the UBS later joined the USF. The State of Cascadia Wood that was later annexed into the Bedrocco Empire formed initially as a independent state between Dragon River Peak City and New Wood. There were talks when it formed back in January 2020 to join empires with

Flamehaze97 wished to remain independant. When

Beeraeka asked around if anyone wanted to join Bedrocco Empire, Flame joined the empire in Spring 2020 and later united with the United Bedrocco States and finally was annexed into the United States of Freedonia.

Flamehaze97 leaves MCO on 1-7-2021, but wishes to stay in USF in the likely event she ever returns to MCO or until USF dies. New Wood declares independence from the State of Cascadia Wood and forms State of Atlas on Valentine's Day 2021.

Organizations affiliated with the empire

A grand Moff is the owner of an empire within the empire, or high ranking people.

A leader of a town in the empire. Has a seat in the server senate.

A citizen of any town listed below

These refer to states annexed from a previous empire that have not fully joined. The empire does not have direct control there. 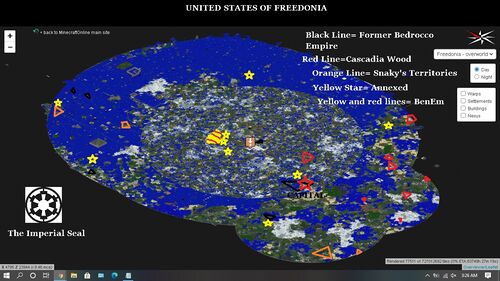