Welcome to Newport! Newport is a large city founded by

snakyman that is located in the June 2020 southwest expansion. Originally known as Project 42, the city was founded by the day after the expansion. The plan was to create the largest city in Freedonia, with the help of many people designing their own districts. The city tries to strike a balance between functional minecraft city and cool looking realistic city. For full list of our automatic farms, see the page Newport Industrial District. It is a part of the United States of Bedrocco. Despite being very far out in the map, there is a canal there and it is accessible via the Newport Route. You can get here through nexus light blue (southwest) 1, as well as, Newport Highway from HyperRoute 15 and Ellandria. From Jibtopia along HyperRoute 10 and

ChivalricCode's Loop Road. There are residential zones, and an industrial zone with many farms - read more below.

The idea of Newport was started by

Markrafter9 in May 2020 when they realized that there was a lack of towns being created in MCO at the time. They believed it to be due to every new player in the server at the time being pressured to join New Eden. The plan was to have multiple people running their own district of the city, almost like multiple mayors, to run the city and attract more attention. They wanted it to be a community build, not something planned out and built by the creators of the city. The group called this city 'Project 42' and began looking for a spot.

The June 2020 Expansion happened soon after this plan was made (some believe the expansion was inspired in part due to the requests of new land to build a large city by this group). Many people began exploring the land before it was even visible on the online map,

snakyman wanted to quickly find an area with flat land and some water nearby to begin construction. He found a decent spot and built a little sandstone pillar there to mark the spot. This pillar still exists today!

snakyman began finding players to help landscape the area. Many were teleported, but most had to take the long trek down from Drocata Swamp. A nether road was eventually made from Drocata. The first thing built was the double roads coming from the docks in the city center. Small skyscrapers started popping up there (but are nothing compared to the ones in the city elsewhere nowdays).

Remember the other original planners talked about in the 'origins' section? None of them were active or helped build the city at all so

snakyman became the de facto mayor of the city. Around this time,

Darkerfly built a house on the extreme hills biome next to the city.

snakyman knew that if another settlement was built there, it would be an impediment to progress, so he invited Darker to join the city. This created the first districts, the City Center, snaky's area, and High Hill,

Newport quickly became the hub of the southwest, which it still is today. The city was the only nexus in the far southwest, and served as a lifeline for every other city and settlement in the region. Pretty much every settlement in the area stemmed from Newport. There are probably at least a dozen outgoing road, nether road, boat or rail connections. This allowed for easy access for new cities to grow. The city has maintained being one of the most (or the most) active cities in the server consistently for over a year, which few settlements have been able to do.

To make permissions simpler, because MCO's permission rules are very specific, and Newport is complicated, this is how the permissions are laid out:

These rules are still in effect and work very well!

Newport City staff by order of promotion, the district they are in charge of, and their staff rank.

On the 11th of August 2020, a huge lag issue occur at Newport where players were barely able to move in certain chunks where fps drop to extremely low and almost freeze the player movement. Admins investigated the problem by trying to remove the tree farm and even the river but nothing worked. Therefore the name of Lagport was born.

2021/02/15: Newport was mass addition griefed by an unknown player using over 3000 cobblestone and scaffold hacks. The grief was discovered the next day. The griefer could not be identified at first, but later,

Ted1246 checked the grief logs and banned Sigmay for griefing. This ban was quickly reverted, as it was found to be a mistake.

SurvivorDan2019, who turned out to be

SailBird, a former moderator who ban evaded and was modded on two more accounts, and utterly fucked

The_Jackal_249. This was one of the biggest griefs on MCO, however, when Admins appeared, all the cobblestone was removed and the whole city restored. This grief was nothing compared to what

snakyman had to deal with in Snaketown and New Snak City. 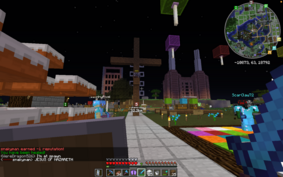 snakyman released this message in the Newport discord at 12:35 AM EST:

gamerTM1234 played jesus, and players put him up on a cross at party island!

This is a list of people who have built something in the city, or purchased a condo or house, and what they built. List is incomplete, we forget to add people sometimes. Roughly in order of date joined.

Here is a nice chart of the districts and some of their notable builds:

** Battersea District, Frostminem & Dark Oak District have not yet been added to this

The city has sparked various builds and settlements outside of the main city area that are dependent on Newport and its Nexus. Generally players who live here like to help with builds within the city and infrastructure in/around it as well. Many of these areas were made during the June 2020 expansion, and the only link to their area was a road or nether road from Newport. They generally have good infrastructure connections to the city. Some of these settlements include:

Note: PLEASE FOR THE LOVE OF GOD do not build something near the city without asking us first please thank you

Here are some pictures of newport:

This is a list of everyone that "willingly helped" terraform, build roads, and dig out the city in its early days:

These people cannot be thanked enough because it is really hard to start such a massive project and give it momentum without lots of people in the beginning.

-an idea of new city was brought up by

snakyman, naming it Project 42 at that time, long before the map expansion. In fact, this conversation may have been what inspired the expansion.

snakyman went out to the wild and chose a spot by the river, and start asking for help to set up a new city in the new land.

-earliest known mention of the word "district" by snakyman, will treat as birth of newport(terraform start) - 05/21/2020