A Beginner's Guide To MinecraftOnline

Hello Player, and welcome to MinecraftOnline! This guide is meant to inform you on how to get a head start on the server, and the various activities available to do.

MinecraftOnline is currently on Minecraft Java Edition, version 1.12.2, and the IP address/domain is minecraftonline.com OR mco.re (both work just as well)

MinecraftOnline is only accessible with a paid-for "Premium" Minecraft account.

IMPORTANT: PLEASE READ THIS SECTION! MinecraftOnline has very strict rules compared to most SMPs, and over 45,000 people have gotten themselves permanently banned (mostly new players) for not following the rules.

Upon joining the server for the first time, you will have been placed in the Rules Hall to read the rules. If you've already joined and decided to skim through the rules, now's the best chance to correct that! You can use the /rules command in the game chat to get teleported to the rules, or you can look at the wiki pages for Grief, Spam and Cheating to get an idea of the rules.

What will get you banned from MinecraftOnline 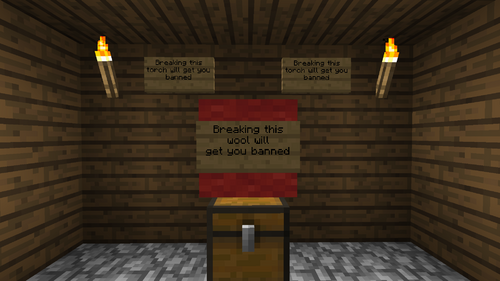 A picture of things you really shouldn't touch

On MinecraftOnline, it is important to state that there is only one punishment used - a permanent ban. Attempting to spam on our IRC channel, Discord server or Telegram group will give you a ban on whatever platform you spammed on.

What won't get you banned from MinecraftOnline 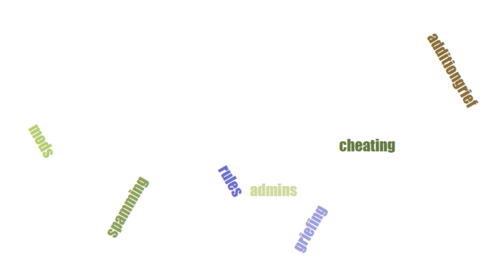 A visual representation of the topics discussed just now (provided by

MinecraftOnline has a free speech policy that allows you to say practically anything in in-game chat (excluding spamming, of course).

It's important to note that the free speech policy ONLY applies in the in game chat. Attempting to do the things mentioned above in our IRC channel, Discord server and Telegram group will likely get you banned on the platform you said it on. Bans on these platforms are usually left up to staff discretion.

While speaking, you should still keep in mind that other players also have Free Right of Action: The rules permit PVP and staff even encourage it as they consider it a normal and important part of the survival multiplayer experience - so if you decide to use your freedom to make enemies with the whole server, expect players to hunt you down and steal your stuff whenever they get the chance!

It’s also important to note that as long as they do not break the rules, players are allowed to do a variety of actions that most players would consider “acting like a jerk”. These include, but are not limited to:

Tip: If you ever find yourself stuck somewhere, don't try to break your way out! You can use /spawn or /home (if you have used /sethome previously) to free yourself without breaking the rules. 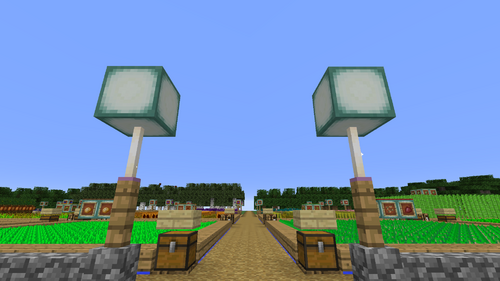 Once you've read the rules and left to spawn, the first action you should take is to type /warp farm to get some food. The farm area is huge, so there should be more than enough food for you, although be sure to replant as you go.

Once you're done collecting food, warp back to spawn with /spawn. from here, there are many different things to do, including:

Tip: If you're short on resources, try checking the recycling chests at the Spawn Visitor Centre! Sometimes established players will place excess food, wood, cobble and even armour in the chests for newer players. If you're lucky, you might even be able to get personal items like written books and map arts!

Travelling the map with ease

MinecraftOnline has a limited map size with a custom circular world border which can be viewed using the dynamic map (accessible at any time with the in-game command /map). You should use the map to navigate around since it is the easiest way to see where nexus access points, landmarks, boat routes and roads are.

How to find the Nexus

The Nexus system can be accessed by going to the back of the visitor center, which you will see a platform that says "NEXUS" to the right. This system is a network of teleportation pads that allow players to traverse large distances in each cardinal direction. Read more about the Nexus and how to use it here.

Before the creation of the Nexus, there used to exist a warp system similar to what other servers use. As a result of it's replacement only a fixed number of historical warps are usable, the only exception to this being /warp farm. You can do /warplist in-game to view the list at any time.

On MinecraftOnline a good way to quickly find a place to start your journey is to use /wilderness. /wilderness will find you a free spot of (in theory) untouched land 1500m from any warp and 300m from any player /home.

When you arrive at your new spot in the wilderness, it is good practice to do /sethome to save it as your home spot, so you can use /home to return there at any time.

Be aware that the /wilderness command has a cooldown of 12 hours, so only use it once you're ready and be prepared beforehand with food and wood.

Tip: You don't need to bring a bed around with you to ward off the night! Just use the /gn or /goodnight commands to vote for day - If enough of the server votes in favor, daytime will come! 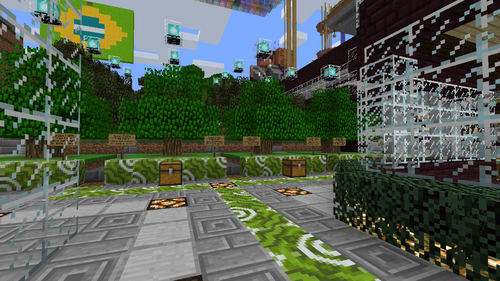 A picture of the spawn tree farm. 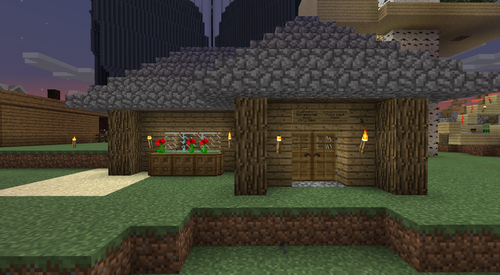 To gather resources for your first house, you should first go gather some oak planks from the spawn tree farm. The tree farm is accessible right from spawn by walking into the visitor center from the front and then walking out on the left exit. Once you're there, hold left click on the oak logs to mine them.

Once you've collected enough wood (about two stacks of logs just to be safe), type /wilderness into the chat and wait while the server finds a place for you to build your first house. When you get there, be sure to check that the terrain is naturally generated and not made by another player. If you accidentally stumble across a build, walk away until you find natural terrain to build on. Once you've found your spot, feel free to start mining, crafting and building!

Tip: Don't be worried if a moderator has teleported to you! If they do, just tell them that you're making your house and they will leave you alone.

Here are some tips to make your house better:

Once you're done building your house, go inside and use /sethome so you can quickly teleport back to your home using /home.

Tip: If you add a chest to your house, be sure to add a block of wool over it so that others can't peek inside and take what they want from your chest. If they try to break the block, they'll get banned for grief of your build.

Tip: There's no need to worry about explosions or fire destroying your build, as both forms of grief have been entirely disabled.

Once you've established a base and want to get more familiar with the MinecraftOnline community, there are a few things you can do, such as:

Still have a few questions? If you're confused about certain aspects of the server, you can find an extensive list of frequently asked questions relating to it here.