SenatorApple first stepped into MinecraftOnline in the early afternoon on September 10th, 2020.

He read the rules as all new player should do, and tried to be careful not to break them.

After exploring the new lands of this server for a bit, he encountered his first friend on Freedonia, a player named

RobotReaction, who warmly welcomed him on the server, and proposed he joins the town he lives in, Charlietown.

After accepting the offer, SenatorApple built his very first house on the server, little did they know this would start the revival of this 2014 village, as the pair started actively expanding and improving the town.

Some time later, when still working on the town, Moderator

1Catnip hears of Charlietown and decides to give it a visit, and even join efforts, building in town as well, Moderator

tyhdefu also joined briefly and built a house in town.

The town grew a lot in the spawn of a few months, expanding on all sides and welcoming new players, which was the new goal of the town. 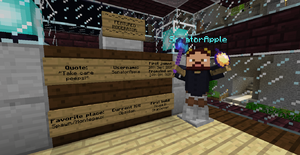 SenatorApple was promoted to Moderator on October 24th 2020, under the name Appleheadfr at the time, just 6 weeks after first joining in September.

And he reaches 300 hours just a few minutes later!

After a while, Apple had become very close friends with

1Catnip, one night while in Discord voice chat together, Apple mentions the desire to create his own town, but is still unsure as to whether or not it is a realistic idea.

1Catnip proposes that the two could create said town together, after just a bit of convincing, SenatorApple was in.

The name of the town was something that came quite late, after creation of the town had already begun. Montegaux stayed sort of a secret for most of its early days.

Montegaux was made fully public when it got a Nexus link, on February 23rd, 2021.

As of today, the town does receive slow additions occasionally, such as SenatorApple's museum. (WIP)

After recently having moved abroad (to Finland), SenatorApple still likes to log on occasionally, when he has time for it, to hang out with friends, help new players and do Moderator duties. He tries to be involved in Staff responsibilities, and enjoys keeping MinecraftOnline a safe place, as well as working on his own projects, when Freedonia (and real life) is calm enough for it.

Sadly real life is busy, so most of his activity nowadays is through Discord or IRC, but hopefully things happen that will allow him to be more active in the future. =)

If you wish to add to it, message SenatorApple about it!

Note : This section only contains notable, more long term skins, not one time skins or those that were accidentally voluntarily left out.

Over time, Apple's skin was edited to slowly but surely look more like Apple's real life appearance, as well as to best fit his personality.

If you still have any questions about me, I am very easy to get in touch with, so feel free to contact me on Discord and I will answer them!

Now, this is about it for this page, keep creating your own story on MCO!

Feel free to add any yourself!