Bloo Noodle Highway, also known as Nexus Loop Outer, is a longer loop road that passes all the secondary outer Nexus hubs of Freedonia. The road is very similar to Nexus Loop Inner, also built by

bloo_noodle. There are also several advertisements for the novels Bloo writes and reads. During the month of January 2020,

Flamehaze97 helped finish the lighting project for Bloo where the road between Nexus Red and Nexus Lime had not been torched yet. The road starts from Nexus Pink and loops back around with a branching road called Great Northwestern Highway which leads past Shireford and across the ocean to New Snak City, Snaketown, and Forrrest. 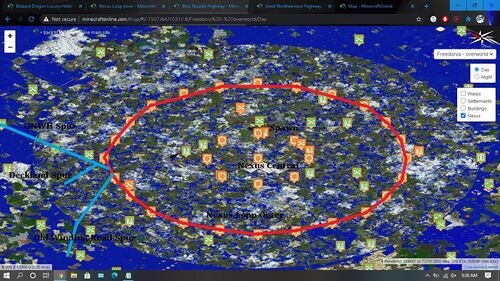 Various Rest Areas along the route built by