From MinecraftOnline
(Redirected from DiamondMall)
Jump to navigation Jump to search

One Diamond Plaza aims to be the premier economic location in all of Freedonia. Boasting 78 shop spaces, it can house the majority of the commercial properties and outlets in the world.

View up the central cylinder

A cross section of the old Diamond Mall

A server Render inside the latest Diamond Mall 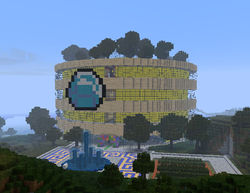 Old view of One Diamond Plaza

In the beginning, there was spawn. And it grew laggy due to the concentration of many shops, signs, and redstone devices. One fine day several of the server staff members put their heads together to try to do something about all this lagginess at spawn, and decided that if we built it, they would come. And by "it" they meant a super mall. Not just a super mall, but the One Mall, one mall to rule them all! Sorta like the One Ring, but without all those grubby little Hobbits. Oh, and no invisibility. Gollum is cool though, he can still come by the One Mall...

Anyhow, these intrepid staff players, aided by a certain God donor who shall remain nameless (not for any privacy or humility reasons, just because it sounds cooler that way), began to plan and build. Over the course of Labor Day Weekend (it's a US holiday, look it up), they um, well... labored... tirelessly until something truly wondrous emerged. After that thing passed, they returned to work on the mall.

At the end of the weekend, this tired little group looked with wonder upon their creation. What were they wondering? Most likely they were wondering why they wasted their three day weekend playing Minecraft obsessively, but that is beside the point. They saw before them an epic structure, 10 levels, 78 shop spaces, stretching from bedrock to the clouds. Realizing that there was no way they could possibly make it bigger without doing more work, they decided to leave it.

And so was born One Diamond Plaza - The One Mall. Are malls born? Maybe Hatched? Whatever, that's how it got to where it is at any rate...

On January 2, 2014, the original Diamond Mall was destroyed, and a new one was erected in its place. The new mall was no longer cylindrical, but, rather an odd geometric pattern, somewhat resembling a cloud. It was a new era in Minecraft malls, a brilliant feat. The content of old shops was brought to a platform high above the warp, for players to grab their old shops.

note: This is not all kept current, and names of shops may not actually be what the owners named them.