A large amount of the FRS has walkable paths above the railway. These are known as skyroads and are able to be added onto by the public for signage and path connections, so long as the original structure is left intact. (i.e. adding on is allowed, but not removal of existing blocks)

Map of North of Nowhere Skyroad

Map of Great Northern Highway at night, prior to the expansion of the map

The main eastern skyroad is known as LavaTown Highway between Spawn and LavaTown. From Nexus Orange 1, it is known as Eastern Highway. Its official route designation is LT. 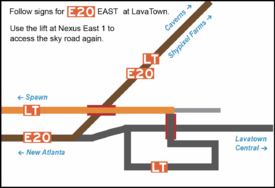 Map for travellers heading East, demonstrating how to continue east due to the skyroad not continuing through LavaTown.